At least around here, there tends to be one popular drink among Masons- single malt scotch. In fact, not only does our local Scottish Rite put on a scotch tasting every so often (with one next week!), but during major events like Grand Lodge, everyone brings out their bottles, and it becomes almost a traveling scotch club, with everyone trying new varieties and enjoying the fellowship that goes along with sharing a similar hobby. I will be the first to admit that I was not a fan of the stuff the first few times I tried it, but now it’s almost my exclusive drink, and with good reason.

What exactly is scotch?

Scotch, or scotch whisky, or single malt scotch,is very simply, a whisky made in Scotland in a very specific manner (actually, by specific laws!) It is almost easier to say what single malt scotch is not. It is not made in America, like Maker’s Mark, or Jack Daniels, nor is it made in Canada, like Crown Royal, it isn’t even made in Ireland, like Jameson. Perhaps the easiest way to tell where it is made is by the bottle- if it says whisky, it is made in Scotland, anywhere else is whiskey, usually even marked “Irish whiskey”, for Jameson, for example.

In addition to this, there are five categories of scotch whisky itself:

It can be a little confusing and overwhelming at first, but for the purpose of this post, we will only be discussing single malt scotch whisky, which means it was made with 100% malted barley mash, by a single distillery, in Scotland.

So, when I first started drinking scotch, I was thinking about it more like vodka. Yes, some vodkas are a better quality than others, and therefore taste a bit better, but they are essentially all the same vodka.  This is not true at all with scotch. Think about scotch more like wine.  Not only do you have the option between red and white, but also merlot, cabernet, chardonnay, riesling and many more. Scotch is much more like wine, because where the distillery is located in the country, tends to dictate its flavor. So, just like you know that you may love syrahs and hate pinot noirs, the same tends to be true about scotch. If you enjoy a scotch from one location, you will probably enjoy another from a different distillery. The nice thing about scotch is that there are only 6 (traditionally 5) regions that scotches come from, instead of the numerous types of wine.

Starting at the bottom and working our way up, the regions of scotch are:

This stuff tastes like gasoline, is there a better way to drink it?

If you are lucky, you have a community of scotch drinkers in your area, probably at your lodge or shrine. If not, you may want to try going to  bar and ordering a scotch, chances are they will only have one or two for you to choose from, unless it is a specialty bar. Usually, scotch is ordered in drams, with one dram equaling to about 2 ounces. Unless you have been a rye drinker for years, I can almost guarantee that you will not care for scotch the first (few) times you give it a try. The first time I did, I thought it smelled and tasted like kerosene, and as the smell burned my nose hairs, I wondered who in their right mind would be willing to drink this stuff. I’ve been drinking scotch for about a year now, and even still, there are times when I am not in the mood to drink it down. However, much like wine, there is a preferred method of drinking a scotch.

Okay, I’m willing to try it, but how do I decide which one?

Buying scotch is again, a bit like buying wine. Scotches have different years, and distilleries will usually produce specific years, with the occasional unusual year that tends to be a special edition. The years refer to the number of years they spent in the barrel. Unlike wine, however, scotch does not age in the bottle, so a 12 year scotch will always be a 12 year scotch in the bottle, opened or not. Scotches are usually referred to by their year, followed by their distillery, for example, the 14 year Oban is a favorite at our house. Usually the younger the scotch, the cheaper the price, but they tend to carry the  harsher  burn, and the more subtle the flavors.

There tends to be two scotches that are recommended most often for the beginner scotch drinker:

The 10 year old Glenmorangie, from the Highland region. This was my first scotch as well. It tends to be fairly inexpensive as far as scotch goes, at around $35 a bottle. That may sound like a lot, but remember that one bottle will last you for weeks, perhaps longer, depending on how often you drink.The flavor is fairly fruity, mostly citrus and peach, with hints of vanilla and honeysuckle. It is beautiful in it’s complexity within it’s simplicity. 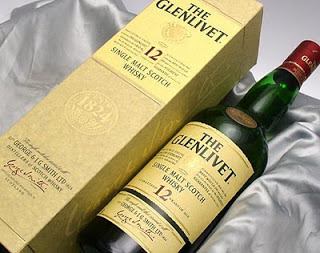 The second most recommended scotch for a beginner is the 12 year Glenlivet. It is a Speyside scotch, and while it does not have the complex flavor of the Glenmorangie,  it does have a very easy to drink taste of oak and vanilla. It is actually the most popular single malt sold in the United States. The price is comparable to the Glenmorangie, at around $30 a bottle.

Remember that the first bottle that you buy is not as important as trying new scotches and improving and expanding your palate. Each bottle will give you a better idea of flavors that you enjoy, as well as those that you do not care for.

What does all of this have to do with Masonry?

On the surface, not much. Remember, however, that a major component of Masonry is brotherhood. Similar hobbies, intrests, likes and dislikes help foster and nurture the brotherhood within a lodge or even jurisdiction. If your lodge or area has a scotch club, go to a meeting and check it out. If you do not, start one with like minded brothers. Many activities can be brought about from scotch drinking, from just trying drinks from each others collections, hosting scotch tastings, or even visiting Scotland to go on a tour of your favorite distilleries. It will help bring you and your brothers closer, which makes for a stronger lodge. Don’t forget to invite the ladies! Just because scotch is often labeled as “the gentleman’s drink” doesn’t mean women don’t like it as well. While a scotch tasting does not make for a great family activity, it does make for a nice evening out with your lady.

3 thoughts on “An Introduction to Scotch”