I was lucky enough to attend DeMolay Conclave this past weekend. This is an event that is not like any other in the Masonic community. In the state of Nebraska, Conclave includes a state ritual competition, the election and installation of the state officers, and of course, finishes with a banquet and dance.

Conclave was held this year in Grand Island, Nebraska, about two hours away from Omaha. The event started early Friday morning with the ritual competition. Basically, the boys choose a part (or parts) that they want to learn, and then preform them in front of a panel of judges, usually older DeMolays. The parts range from the preceptors, which are a paragraph long, to the flower talk, which encompasses many pages. T is the state ritual director, and so he gets to be in charge of picking all of the judges, and all of the paperwork. The participants are scored on a number of items, including ease, number of prompts needed, words skipped, and dress.

Fun at the waterpark

After a quick lunch, the guys got ready for the long form initiatory and DeMolay degrees. Now, this is something that is done a bit different than the rest of the Masonic organizations. A long form degree requires at least 16 members on the degree team, something that is difficult to accomplish with teens, especially in the busy summer months. So instead, often when a new member wants to join, they will conduct a short form degree, which takes about half of the amount of people. The long form degrees are then conducted at the two major state events, Conclave and Roundup, to any new members that have joined since the last state event. While these degrees are not “public” per se, any advisor or parent is more than welcome to watch them. If you ever get the opportunity to watch a long form degree for DeMolay, I highly recommend it, especially since (at least in our jurisdiction) it is done in full costume.

As a reward for their hard work, they guys were treated to a casino night by the state Sweetheart (a member of Job’s or Rainbow that has been chosen to represent the girls groups in DeMolay). Far after many of the younger members went to bed, the older guys were on their way to a local Lodge building. In our state, we are lucky enough to have a recent re-established chapter of the Chivalric Knights  of the Holy Order of the Fellow Solders of Jacques DeMolay, or Priory, for short. This is a group within DeMolay that is made up of boys over the age of 16. They have their own fun nights, as well as state events, both within and separate from DeMolay events. For Nebraska’s Priory, it is not an advancing line, so every year, their leaders are elected and installed at Conclave. They also initiated new members during this time.

The Sir Knights chosen for Priory leadership for 2015

Bright and early the next morning, the Chapter room was opened for elections for state officers. One of T’s brothers ran, and won! The girls running for state Sweetheart also gave their speeches and answered questions shortly there after. After all of the speeches and voting was finished, a very special honor was given to a select number of DeMolays, the Degree of Chevalier. This is the highest honor that can be given to an active DeMolay for distinguished service to the group. Interestingly, this degree is not given by active DeMolays, but instead by past DeMolays who have also received the honor. T and a number of his friends were able to bestow this honor to three boys, one of whom was one of T’s brothers. Unlike regular degree work, the Degree of Chevalier is a public ceremony, open for anyone to watch.

The boys spent the afternoon at the waterpark, having the opportunity to relax before the banquet. Now, when I was told that there was a banquet Saturday evening, I assumed that meant it was DeMolays, advisors, and parents only. What I didn’t expect was the amount of support brought out by the rest of Nebraska’s Masonic Community. The Grand Master was there, as was the Grand Line for OES, and almost all of the potentates from around the state. There was not a Masonic group that went unrepresented that night. It swells my heart with joy to know that all of these people, many of them well beyond my years, have full support of DeMolay, and all of its members.

The only downside to having that much support, is that every representative is encouraged to bring greetings from their group, which can often end in lengthy speeches. I myself am used to this from other Masonic events….a bunch of teenage boys however, had a much harder time keeping still and quiet. After everyone had their say, the awards for the ritual competition were given out. Unfortunately, Omaha chapter didn’t do so hot. Hopefully next year will be better. After this, the new state officers were installed by former DeMolays who were also state officers in their time. The Priory put on a wonderful arch of steel for this installation. They did a better job than I’ve seen some Templars do.

After the room was nice and full of antsy teenagers and tired adults, it was time for the dance. I’m not sure how it started exactly, but at every major DeMolay (and I assume every major Job’s and Rainbow) event, there is a dance. Luckily, even though most of them are highschoolers, it tends to be an atypical highschool dance. I think that the fact that there are some songs that have ritualistic dances to go with them helps. Many of the adult leaders and advisors were once in a Masonic youth group, so they often know the dances as well, which helps encourage the teens to be a little less awkward, even if the girls do outnumber the boys three to one.

You many wonder why I often give a report of DeMolay events I attend. This is not to just take up space, or tell you about this fun weekend I had. Kiddos in the Masonic youth groups are the future of Masonry. If we want the groups that we enjoy to continue for years to come, we need to do our best to make sure that we can retain these members as adults. At one point during the banquet, the Grand Master had everyone who was once a DeMolay and is now a Master Mason to stand up. Well over half of the adult men in the room stood. One thing that I haven’t told you about this weekend, we had maybe only 30 active DeMolays attend it. So often do we get caught up in other things that don’t matter, that we push aside the things that do. DeMolay, Job’s Daughters, and Rainbow for Girls teaches extremely valuable life lessons that help guide a youth to lead a good life. Isn’t that all we want for our children? Please, do what you can to support Masonic youth groups, the best thing to donate is your time. Without Masonic youth, Masonry may become a thing of the past in years to come.

This past weekend. T and I helped coordinate and run a statewide DeMolay event called Round Up. I am not certain if other states do this, or anything similar, but this has been an event at least since T was a DeMolay. The entire weekend is a series of sports competitions between chapters. It started as many weekend Masonic events do in Nebraska, with the three hour drive to Kearny with a van full of teenage boys.

After a quick lunch, we headed off to The Big Apple, a family entertainment complex with bowling, go karts, mini golf, and more.

The first competition was an individual one, billiards. One of T’s brothers actually ended up winning first place! 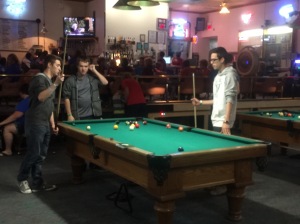 The second competition was team volleyball. They ended up doing both Chapter teams, as well as composite teams made up of players from the various Chapters around the state.

While not a competition, The Big Apple also had go-karts, which the boys were able to race in.

The final competition was mini golf. The course there was probably one of the coolest I’ve ever played.

I mean, it was really, really cool.

Like I would drive out there again just to play there. 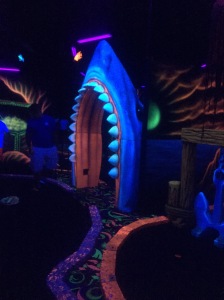 Luckily we are in Kearney fairly often for Masonic events, so we will be back.

All of these competitions ended up taking about 6 hours. So I ended up spending a lot of time in the arcade.

They had bowling as well, which was supposed to be a competition, but we barely had enough time to do what we did.

We then went back to the hotel, and had a quick bite to eat.

Afterwards, the boys went to the hotel’s volleyball pit, to play a few rounds of Quidditch.

If you ever get a chance to play, or even watch a match of Quidditch, do it. It is highly entertaining.

The guys then headed over to the local YMCA, for, you guessed it, more sports.

The games of the evening were soccer and basketball, done the same way that they did the volleyball.

The Y also had a small arcade as well, which some of the nerdier guys preferred.

They also had a bounce house, which the adult advisers had to test first, to make sure that it was, you know, safe. 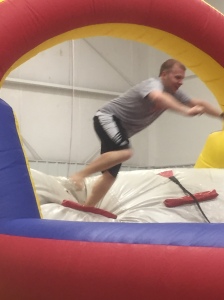 It was about 10pm by this point. I headed back to the hotel for some much deserved sleep.

Some of the guys, on the other hand, headed to a local Lodge for a Priory investiture.

The Priory is a sub-group of DeMolay for boys 16 and older. Investiture is just a fancier word for initiation. I wish that I had been able to stay awake for it, hopefully next time.

Sunday morning was spent doing a DeMolay long form initiation. See, normally, most DeMolay chapters only do a short form initiation when they welcome new members. There is actually an entire play for the DeMolay degree, similar to the ones done during the Scottish Rite degrees. However, this takes a large degree team that many chapters do not have access to. So, once a year at Round Up, Nebraska Chapters have all of their new members go through the long form initiation so that they are able to experience the entire thing. While any adult adviser (including myself), or parent of a DeMolay can watch the ritual, it is still considered secret work, and so cannot be shared here.

After the ritual, awards were passed out for the sporting competitions. Lets just say that Omaha Chapter is not known for its sporting prowess. We then said our goodbyes, and headed home. All in all, a pretty great, if not a bit exhausting, weekend. The sweethearts had a jail fundraiser for Relay for Life where you could pay to put people in “jail” (no phones, no fun), and ended up raising over $500 over the weekend.

On a completely different note, I have created a Tumblr for the Mason’s Lady. Much of what is here will be reflected there as well, as well as some other extras. You can find it here.